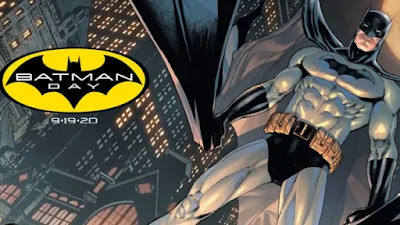 One of the big things missing from DC's Batman Day plans for September 19, 2020 was plans for comic book stores, which in previous years has been the centerpiece for the annual event.

11 days after announcing their plans however, the publisher has emailed retailers to explain why they chose not to involve comic book stores in their original plans.

"Due to the ongoing global health crisis, this year's Batman Day will differ from our past blow-out celebrations," the statement reads. "As with many recent events, we have pulled back from the physical elements of Batman Day, which is why there are no printed comic books for Batman Day 2020."

This year's Batman Day has virtual runs and in-game content, but it also includes several "physical elements" (as DC calls it) such as 'Batman Day' themed displays at Walmart, Target, Amazon, and Hot Topic; new products from LEGO, SpinMaster, and Funko; and a line of t-shirts and hoodies from Uniqlo UT in Japan.
Posted By nwcomicgames at 6:17 AM