WildStorm returns at DC next year

WildStorm alum Grifter will return to comics with October's Batman #101, and that's not the only piece of that mothballed brand that'll be back in the coming months. 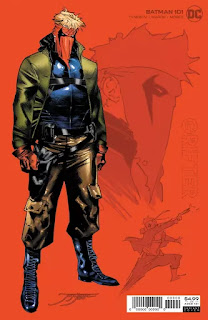 "In 2021 you're going to see more WildStorm integration, but in a thoughtful, deliberate, creative way when it makes sense," Lee said in a Q&A session aired as part of the second DC FanDome on September 12.

"You want to make sure all the characters in our universe exist for a reason and occupy a certain part of the spectrum in our mythology so you don't have characters with duplicate powers, duplicate origins, or duplicate missions."

Grifter will be re-introduced in October's Batman #101 as a new hire for Lucius Fox, who was recently revealed to be CEO of Wayne Enterprises.

This would be Grifter's first major DCU appearance since the end of The New 52: Futures End in 2016.

Posted By nwcomicgames at 6:59 AM