IDW Publishing will celebrate the 25th anniversary of the Transformers: Beast Wars animated television series with a new comic book series debuting in February with an oversized first issue containing 30 pages of story and bonus content.
The publisher did not specify if it will be an ongoing or limited series.
"For an entire generation of Transformers fans, their first experience with 'Robots in Disguise' was through the Transformers: Beast Wars television show, debuting in 1996 as the cutting edge of computer-generated children's entertainment," reads IDW's announcement. 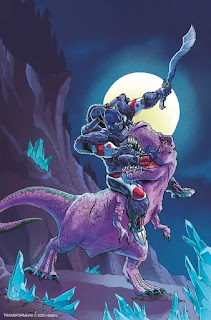 So its Transformers: Beast Wars comic series will welcome fans to a future Cybertron populated by scientific-minded Maximals and action-oriented Predacons.
"When the successor to the Megatron name steals a golden disk and a ship capable of traveling through time, only Optimus Primal and a team of Maximals — Rattrap, Rhinox, Cheetor, and a new character Nyx — can stop them," reads IDW's description.
The series will be created by the creative firm of Burnham and Burcham - Transformers alums writer Erik Burnham and artist Josh Burcham.
"Beast Wars was a wonderful and weird pivot from the Transformers setup to which I was first introduced. Big personalities, unexpected twists, and actual stakes all popped up regularly on the show, and those are tools that I enjoy using to build new stories," says Burnham. "Best of all, the enthusiasm from everyone involved in this project has been so high that I'm feeling constantly inspired!”
Posted By nwcomicgames at 2:16 PM