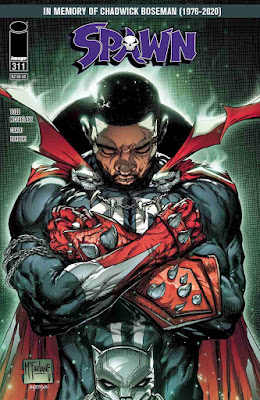 Spawn creator Todd McFarlane paid tribute to Chadwick Boseman with the upcoming cover for Spawn #311. The Image Comics president decided to honor the fallen Black Panther star with the choice. McFarlane joins the host of fans who are still mourning the loss of the star.
Marvel’s Cinematic Universe has changed how movies are made and consumed, especially in the superhero genre. Comic book movies have literally molded themselves after all these years, so it only makes sense for another character’s title that presented a step forward for the medium to pay respect.
But, McFarlane rightfully points out that this gesture not only puts the spotlight on what Boseman did for minority fans as King T’Challa, but the resolve he displayed in his final years.
"Given the limited amount of minority characters in the comic industry today that are considered major Superheroes, I thought it appropriate for one of those well-known heroes (Spawn) to pay tribute to a man who made a lasting impact on helping shape such a strong superhero of color," said McFarlane.
"Chadwick Boseman is a person who honed his skills and then made a career using them. Then he fought a fight against his own body that showed the true spirit of this man. We should all admire the traits Chadwick shared with us. And the inspiration he gave to millions of children around the globe who got to see a strong, meaningful and proud hero that looked like themselves."
Posted By nwcomicgames at 6:11 AM