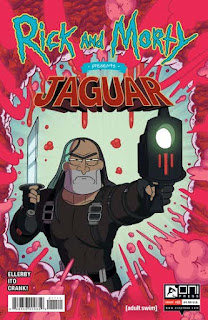 Rick and Morty Presents Jaguar #1 $3.99 Oni Press
Jerry takes Rick's portal gun to go and explore some alien planet he sees advertised on Interdimensional Cable. Whilst he's there he unwittingly commits genocide. The planet's government decrees that Jerry Smith must be hunted down and executed for his actions. The planet hires the best killing machine they can think of: Jaguar.
Posted By nwcomicgames at 5:03 AM