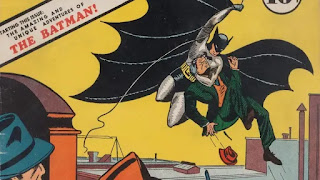 A copy of the 1939 comic book Detective Comics #27, with the first appearance of Batman, was sold at auction this past weekend for $1.5 million.
According to auctioneers Heritage Auctions, that is the highest price ever paid for a Batman comic book. The record was previously $1.075 million for a copy of the same issue, graded at 8.0 by the Comics Guarantee Company, back in 2010. 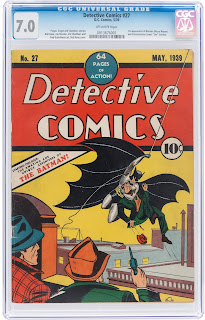 This week's $1.5 million dollar Detective Comics #27 was graded 7.0 by CGC - a full point below 2010's auction winner - signaling a much more voracious appetite for Batman's origin in the decade since.
"I'm not at all surprised at the result," Heritage's VP Barry Sandoval said in the announcement. "After all, this is one of the best copies you will ever see of one of the most important comic books ever published."
According to CGC, there are only seven known, unrestored copies of Detective Comics #27, including these two.
"While any copy of this key comic is something special, we think this one stands up extremely well against any we've seen offered to the public," reads Heritage's description of the issue just sold. "The yellows on the cover are clean and unsmudged, and few surviving copies can make that claim. And notice that the back cover is also appealingly clean. The book is also well-centered, with none of the back cover ad wrapping around to the front. Also note that this book has no codes or markings of any sort, which can be said of very few 1939 comics!"
If you were around in 1939, you would've been able to buy Detective Comics #27 off the newsstand for 10¢. Even when you factor in inflation from 1939 to 2020, that's still just $1.87.
Posted By nwcomicgames at 6:16 AM