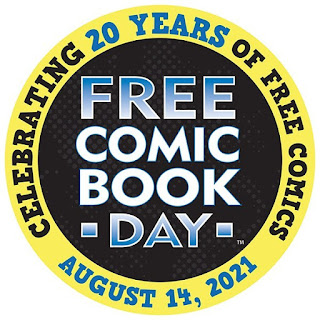 The press release follows:
Media Release — Diamond Comic Distributors is pleased to announce that Free Comic Book Day (FCBD), one of the comic book industry’s most beloved and anticipated celebrations, will once again be a single-day event, scheduled to take place Saturday, August 14, 2021. The event, which traditionally takes place on the first Saturday in May, will be celebrated in August 2021 in the hopes that much of the uncertainty and disruption related to COVID-19 will have passed.
This celebration marks the 20th anniversary of Free Comic Book Day and plans to commemorate this anniversary include themed t-shirts, posters and a commemorative 20th anniversary logo.
“I am so happy to be making this announcement today and so proud of our work with retailers and vendors these last 20 years to bring more awareness to the comic books we all love,” said Steve Geppi, President, Chairman & CEO of Geppi Family Enterprises. “In the past two decades, fans have experienced some truly remarkable Free Comic Book Day events because of the commitment of our partners to create an incredible celebration of comics. It’s such an energizing day and we look forward to making our 20th anniversary celebration the best one yet!”
Joe Field, founder of Free Comic Book Day and owner of Flying Colors Comics & Other Cool Stuff in Concord, CA said, “Celebrating 20 years of FCBD is a fantastic milestone. Free Comic Book Day has been the introduction to comics for so many and while the world has changed over these last 20 years, our love of comics and the power of comics to entertain and enlighten is stronger than ever. I’m thrilled we’re focusing on a fun-filled worldwide single-day FCBD again for 2021. I can’t wait to see all the first-time comic-curious readers, as well as our long-time faithful fans come together once again.”
Free Comic Book Day 2021 will feature up to fifty free titles available at participating local comic shops. The titles will be comprised of up to twelve gold and thirty-five silver sponsor titles. Titles will be announced to the public in March and will appear in the April 2021 edition of the PREVIEWS catalog.
For more FCBD news and updates as they become available, visit freecomicbookday.com and sign up for the e-newsletter. You can also follow FCBD on Facebook, Twitter and Instagram.
ABOUT FREE COMIC BOOK DAY— Celebrating its 20th Anniversary, Free Comic Book Day is the comic book specialty market’s annual event where participating comic book shops across North America and around the world give away comic book absolutely free to anyone who comes into their comic shops. The event is traditionally held the first Saturday in May and is the perfect opportunity to introduce friends and family to the many worlds of wonder available at local comic shops. From superheroes to slice-of-life to action/adventure and beyond, Free Comic Book Day has a comic book for everyone!
Posted By nwcomicgames at 6:04 AM