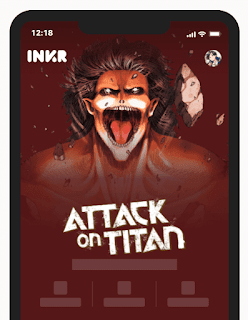 Media Release — Today, Kodansha USA, purveyors of some of the world’s most recognized manga properties, has expanded its partnership with INKR Comics, the immersive new comics reading and publishing app, to increase its existing library of fan-favorite manga to over 400 volumes.

This week marks the debut of such popular series as Attack on Titan, To Your Eternity, A Silent Voice, Your Lie in April, and more. Also joining the INKR streaming service next week are a number of anime-inspiring manga series like Fire Force, FAIRY TAIL, and The Seven Deadly Sins.

Kodansha USA is among the highest profile publishers to be a part of the INKR Comics app launch on October 15, 2020, and has continued to add titles to the budding manga, webtoons, manhua, and comics streaming service. Fans who want to try the new platform can download the app for iOS and Android, here.

Once in the app, users can read select chapters of manga for free, and even sample the INKR EXTRA streaming service with a 30-day free trial. At the end of the trial, fans pay only $4.99 a month to continue using the service.

INKR offers readers universal access to comics from around the world, including Japanese manga from Kodansha USA and Tokyopop, Korean webtoons from Mr. Blue and Toons Family, Chinese manhua from Weibo and FanFan, and American comics from publishers such as Image, an unparalleled catalog of diverse works available to read on one app.

For more information on this and other Kodansha USA Publishing titles please visit: https://kodanshacomics.com/.

INKR Global is a human-centered, design-driven tech company aiming to make comics universally accessible. INKR helps comic publishers and creators reach readers globally by making awesome content available to consumers, no matter where they are. Based in Singapore with a team working out of Vietnam, INKR was created by passionate readers of comics and manga. They believe in the potential of the medium as not only an avenue for storytelling but also as a means of education and communication. Other apps created by the team include Fuzel Collage, Woodpost, Wikly and KeepShot.

To find out more about INKR, please visit https://inkr.com.

Established in New York in 2008, Kodansha USA Publishing (KUP) is a subsidiary of Kodansha, Japan’s largest publisher. Its manga imprint is Kodansha Comics, which began by releasing Katsuhiro Otomo’s Akira and Shirow Masamune’s The Ghost in the Shell. Today, thanks to hits like Attack on Titan, Pretty Guardian Sailor Moon Eternal Edition, Noragami, and FAIRY TAIL, it is now the No. 2 manga publisher in the United States by revenue. VERTICAL, which publishes fan favorite manga titles like Chi’s Sweet Home and BLAME!, as well as the popular MONOGATARI novel series, is also an imprint of KUP. Both Kodansha Comics and VERTICAL are distributed by Penguin Random House Publisher Services. http://www.kodanshacomics.com