Yesterday, December 27th marks four years since beloved actor and writer, Carrie Fisher, passed away. Fisher was best known for playing Princess Leia in Star Wars and even appeared in all three sequel movies despite passing a year before Star Wars: The Last Jedi hit theaters.

Many people have taken to social media this morning to pay tribute to Fisher and share memories of the icon. One person to acknowledge the day is Fisher's long-time friend and onscreen brother, Mark Hamill.

"#AlwaysWithUs," Hamill tweeted with a broken heart emoji. The actor known for playing Luke Skywalker included the credits from Star Wars: The Last Jedi that read, "In Loving Memory of our Princess Carrie Fisher." You can view Hamill’s tweet below: 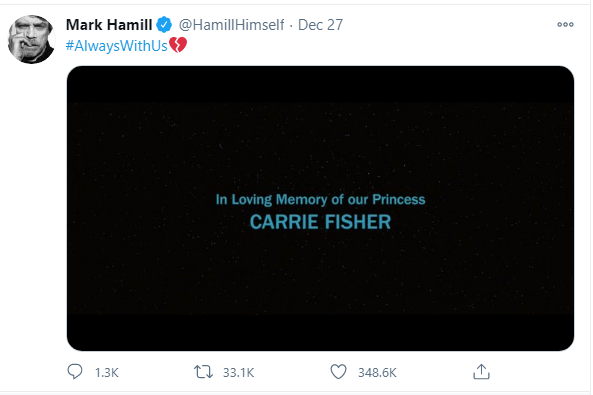 Many people commented on Hamill's post: "In our hearts forever, our Princess," @blberry_ wrote. "Our beautiful Carrie Fisher may be gone BUT she will NEVER, EVER be forgotten. This amazing gal has been my hero since 1977 & will be the coolest, bravest Princess in the whole galaxy forever & beyond. I bet she's out there right now causing mischief & mayhem," @GillyWillyWoo25 added. "When I first saw Star Wars, I was 10 and wanted to be Princess Leia. By the time Return of the Jedi came out, I wanted to be Carrie. She was such a huge influence growing up, I wanted to be as clever, intelligent, and witty as she was. She'll live on forever in my heart," @Ali_Younge replied.

October 21st would have been Fisher's 64th birthday, so Hamill and many more folks also posted about Fisher on that day. "Happy Birthday Carrie Frances Fisher. The world will never stop missing you," Hamill wrote on Twitter.

Posted By nwcomicgames at 7:25 AM