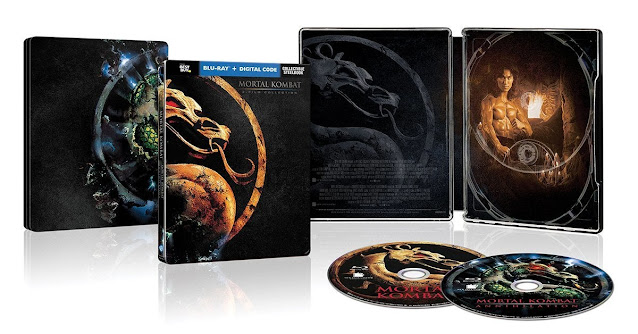 Admit it, you enjoy the 1995 Mortal Kombat film. The 1997 sequel Mortal Kombat: Annihilation on the other hand...not so much. Still, both films packaged together in a fancy exclusive SteelBook Blu-ray set with digital codes for $16.99 isn't a bad deal.

You can pre-order the Mortal Kombat SteelBook Blu-ray bundle here at Best Buy, who have corned the market on SteelBook exclusives. Details on special features haven't been revealed, but we assume that there isn't anything new here.

Granted, it would have been better if the set was in 4K (and Annihilation wasn't included if we're being honest). However, there's no guarantee that a 4K release will ever happen for the original Mortal Kombat and we don't know why they would bother with Annihilation. That said, the original film is definitely worth owning. Annihilation might be worth a laugh at the very least. Or, as many will point out, it will be useful as a coaster.

Don't forget that Warner Bros. has a new Mortal Kombat movie on tap for 2021 that will debut in theaters and streaming on HBO Max at the same time. The cast includes Ludi Lin as Liu Kang, Mehcad Brooks as Jax, Jessica McNamee as Sonya Blade, Hiroyuki Sanada as Scorpion, Josh Lawson as Kano, Tadanobu Asano as Raiden, Joe Taslim as Sub-Zero, Chin Han as Shang Tsung, Sisi Stringer as Mileena, and Lewis Tan in an unnamed role, which some speculate to be Johnny Cage. It wrapped filming late last year.