Monday's Headlines | WandaVision: Who Is the Beekeeper?

WandaVision is already giving fans of the Marvel Cinematic Universe plenty to chew on until the third episode comes out January 22nd. Some of the biggest questions so far are either "What's this Agnes lady all about?" or "Who the heck is Dottie?"; but nothing looms as large as one pivotal moment towards the end of "Episode 2." The moment in question involves the beekeeper, and it's something that's left most fans scratching their heads.

Light spoilers up ahead for WandaVision — proceed with caution if you've yet to see the first two episodes!

In the closing moments of the second episode, Wanda (Elizabeth Olsen) and Vision (Paul Bettany) go outside to investigate a noise they've heard. That's when they notice a mysterious man escape from the manhole in front of their house — the same man wearing the SWORD suit we've seen before. Unlike the trailers, however, this time the man seems to be swarming with bees or flies. 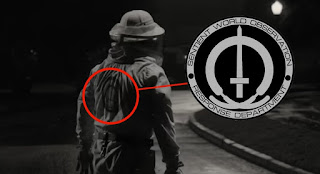 Naturally, fans got to chatting about the character's potential identity. Thanks to the credits at the end of the episode, we know the character is physically played by Zac Henry, a longtime stuntman for Marvel Studios.
In fact, he's even listed as the "stunt rigging coordinator" for WandaVision and has had similar positions on Ant-Man and the Wasp, Avengers: Infinty War, and Black Panther to name a few.
Posted By nwcomicgames at 6:12 AM