Tuesday's Headlines | LEGO Star Wars: Back in Stock After Sell-outs 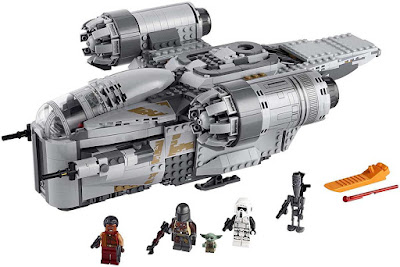 LEGO's #75292 Razor Crest set is seeing a surge of interest among collectors and Star Wars fans thanks to the explosive events of the Disney+ series Star Wars: The Mandalorian Season 2. We're seeing sell outs everywhere, but it was available here on Amazon on backorder for the standard $129.99 at the time of writing. It's been going in and out of stock, so it probably won't last long. Keep a look out for restocks at Walmart, at shopDisney, and at LEGO.com.

The 1023-piece set includes The Mandalorian, Greef Karga, Scout Trooper, and Grogu (aka The Child aka Baby Yoda) minifigures, plus an IG-11 LEGO figure. Additional features for the Razor Crest include a dual LEGO minifigure cockpit, 2 spring-loaded shooters, a cargo hold with opening sides/access ramps and carbonite bounty elements, a sleeping area, and a detachable escape pod.

Posted By nwcomicgames at 4:10 PM