What Did We Miss? Conan Chronicles Epic Collection TPB Song of Belit 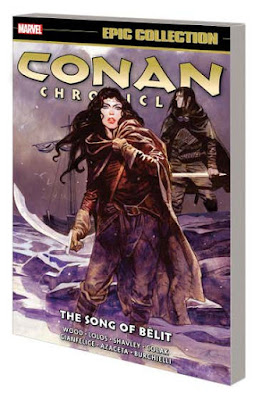 Conan Chronicles Epic Collection TPB Song of Belit $44.99 Marvel Comics
The Queen of the Black Coast! Conan the Barbarian and the maritime monarch Bêlit are the undisputed masters of the Western Ocean, their names whispered in fearful awe!
But while most seafarers know better than to challenge their reign, strange new threats are arriving from unexpected shores. Conan must return to Cimmeria to hunt an impostor destroying villages in his name, but he discovers a shocking connection to his own past!
In the wake of an unthinkable tragedy and an enormous strain, Conan and Bêlit find their bond buckling. As Bêlit returns to her childhood home, what she discovers in the sands of Shem could separate her from Conan - forever!
Meanwhile, Conan seeks clarity through the mind-altering power of the yellow lotus - but will the visions revealed to him be more than he can bear?
Collecting CONAN THE BARBARIAN (2012) #7-25.
Posted By nwcomicgames at 5:55 AM