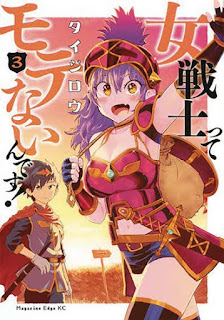 Who Says Warriors Cant Be Babes GN Vol 03 $12.99 Seven Seas Entertainment
By: Tajiro
Inspired both by a call to justice and a totally massive crush on the Hero, one woman trained until she became the strongest fighter alive!
Unfortunately, she might have gone a little too far because she's so strong that no matter how hard she tries, the Hero sees her as a juggernaut instead of a sexy love interest.
Will the dark lord be slain? Maybe.
Will two heroes fall in love?
Only time will tell!
Posted By nwcomicgames at 6:18 AM