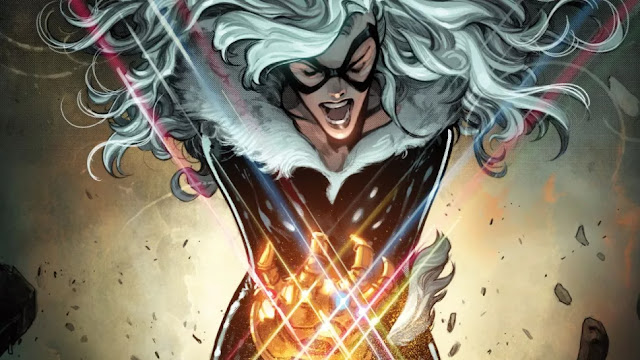 One of Marvel's latest breakout stars, the Black Cat, is stealing the Infinity Gauntlet this summer (at least on the newly released cover of Black Cat #8 by Pepe Larraz) - and she's also stealing the show on a previously announced Marvel event which has now been rescheduled.

"The truth about the Infinity Stones will come to light this summer in Infinite Destinies! Shown last week at the ComicsPro retailer event, Pepe Larraz's cover for Black Cat #8 reveals that someone new is trying to get their hands on the most important artifacts in the Marvel Universe," reads Marvel's announcement of Infinite Destinies and its new tie-in with Black Cat.

"Felicia Hardy's next heist will be for none other than the Infinity Stones, and she won't be the only character seeking to wield their power," it continues.

Posted By nwcomicgames at 5:36 AM