Monday's Headlines | Spider-Man vs. Kingpin In May

To go along with its mega-sized villain the Kingpin (all that bulk is muscle!), the upcoming Amazing Spider-Man arc 'King's Ransom' will conclude with an oversized special one-shot arriving in May. Clocking in at an unspecified – but "oversized" – page count, May 12's Giant-Size Amazing Spider-Man: King's Ransom #1 is written by Nick Spencer, with art from Rogê Antoniô, and concludes the arc which kicks off in March 10's Amazing Spider-Man #61. 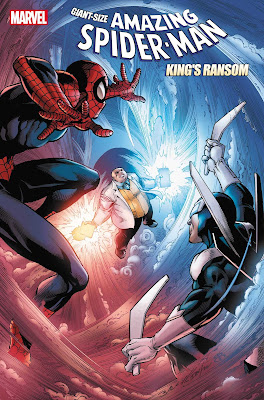 "With twists and turns in every issue, Nick Spencer's Amazing Spider-Man has become one of the most unpredictable books on stands today!

"Kicking off next month in Amazing Spider-Man #61, 'King's Ransom' will be an arc so momentous, it will conclude in a special, giant-sized finale issue in May."

Oddly enough, what this means is that the arc itself won't conclude in the Amazing Spider-Man title proper – not an unprecedented move in modern comic book storytelling.

What's more, the special costume Spider-Man will don in the arc's kick-off, doesn't appear on the cover of the one-shot.

Posted By nwcomicgames at 7:01 AM