Yesterday, for Todd McFarlane, his biggest achievements of all time were launching Image Comics and launching his creator-owned title Spawn - both happened in 1992. Now, 29 years later he has a plan for something he feels will be just as big - or possibly bigger.

"As I've been formulating this for months and months, I didn't want to bring her in until we were ready to pull the trigger, but we're here and I'm dropping it," he tells sources. 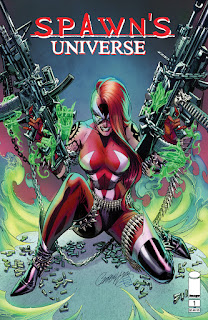 McFarlane's long-running Spawn title will now be the flagship title in a line of multiple ongoing titles in this character's corner of the Image Comics - with its own interconnected continuity, storylines, team-ups, and more. It'll all work under the banner name of 'Spawn's Universe,' which will also be the name of the one-shot event book to kick it all off later this year.

The first wave of Spawn's Universe titles is three books: King Spawn, The Gunslinger, and The Scorched.

It all begins in June with Spawn's Universe #1, followed by King Spawn beginning in August, The Gunslinger in October, and The Scorched in December.

Did you write this shit down Spawn fans?

"There should be five or six names on there that should get the retailers' attention," he said. McFarlane is also open to working with new creators and helping create new talent.

Posted By nwcomicgames at 4:58 AM