DC is marking the 80th anniversary of Oliver Queen, the Green Arrow, with a 100-page giant one-shot anthology that brings together characters and creators from throughout Green Arrow's history. 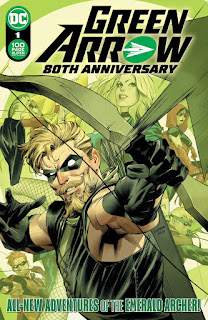 Oliver Queen hasn't had a starring role since his last title ended with #50 in 2019, but now DC is putting him back in the spotlight for his landmark anniversary, which arrives at the same time as DC's Wonder Woman 80th Anniversary 100-Page Spectacular.
The publisher has celebrated other landmark anniversaries with similar special oversized issues, including the Superman-centric Action Comics #1000, and of course Detective Comics #1027, which marked 80 years since Batman's debut in Detective Comics #27.
"Time to dust off your Boxing Glove arrow, fire up the Arrowcar and join DC in celebrating eight decades of emerald excellence!" reads DC's description of the one-shot.
"On June 29, the Green Arrow 80th Anniversary 100-Page Super Spectacular #1 brings together some of comics' greatest storytellers to pay tribute to Green Arrow's legacy and the heroes and villains that have fought aside and against him."
Posted By nwcomicgames at 5:52 AM