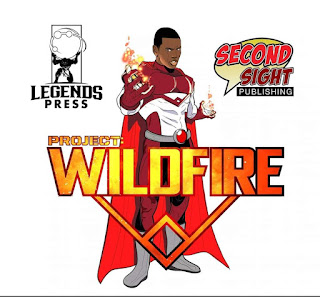 The press release follows:
Media Release — Second Sight Publishing — who delivered Lady Freedom, The Edge and the Mississippi Zombie anthology series — is adding an impressive new title and creative team to its lineup. Project Wildfire is the brainchild of artist Quinn McGowan, and he’s been developing the complex superhero story with the help of award-winning writer and head comics reviewer for leading industry site Bleeding Cool, Hannibal Tabu.
The series follows the adventures of Will Watson the 3rd, a college sophomore who volunteered for a medical experiment to help pay for his tuition and books. The other test subjects died, and Watson emerged nearly invulnerable, able to fly and shoot bursts of concussive superheated plasma from his hands and sense the presence of victims of the Wildfire Contagion, which turns everyday people into gigantic kaiju, often threatening the city and its citizens.
“We couldn’t be happier to bring Project Wildfire to Second Sight,” said CEO Bradley Golden. “I’ve been a fan of this project for some time, Quinn’s an amazing artist and I even have Artifacts #35, t he book Hannibal did when he won the Top Cow Talent Hunt.”
“It’s important to all of us that we’re all Black men from the south,” said publishing manager Marcus H. Roberts. “People like to say that Black people can’t work together. I can work with anybody, we wanna show what we can do.”
Project Wildfire #1 will be in September Previews, featuring a story of Wildfire finding out that his world of fighting monsters might be more complex than he anticipates as he meets Sergeant Michael Marsden … his predecessor.
“Project Wildfire means a lot to me,” said McGowan. “The lead character is named after my grandfather, who had me watching his favorite wrestler Tommy Rich every weekend. Faze, the main heroine in the book, is patterned after my wife. There’s a lot of Orange Mound and the city Hannibal and I call home as a character in the book.”
“Quinn and I already know the last page of this book,” Tabu said, “and working steadily towards that end gives us a certainty that we enjoy. We have covers from storyboard artist Jeremy Simser coming up, he did WandaVision and the second Dr. Strange and a lot more. We have another cover from Marvel and DC artist Ray-Anthony Height and so many surprises. Quinn dropped some work on Disney+’s Flora & Ulysses. We hope to show you how deep the rabbit hole goes.”
Project Wildfire #1 will be on stands in November of 2021.
For more information, please check out bit.ly/projectwildfire.
http://operative.net/projectwildfire-secondsight.html
http://www.secondsightpublishing.com/
Posted By nwcomicgames at 5:57 AM