This fall, Mario and Nintendo fans are going to have a lot of new toy options to choose from thanks to Jakks Pacific. The company has offered a lot of great items based on Nintendo's mustachioed mascot over the years, but the latest sets just might represent some of their best work yet! Mario fans will have two playsets to choose from: Bowser's Airship Playset and the Super Mario Deluxe Cloud Playset. There will also be a three-pack of figures featuring Cat Mario, Cat Luigi, and Cat Peach as they appear in Super Mario 3D World + Bowser's Fury on Nintendo Switch. 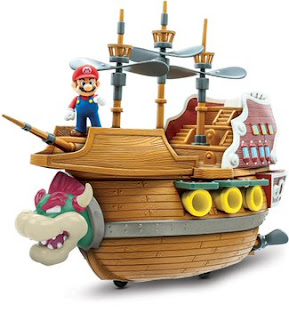 It's hard to pick a favorite among the three offerings, but it seems like a safe bet longtime Mario fans will want to add Bowser's Airship to their collections.
Bowser and his minions began using Airships in Super Mario Bros. 3, and they've appeared in a number of games since then. Bowser's iconic visage appears on the front of the ship, adding a great detail that's sure to delight fans young and old.
The Cloud Playset is meant to resemble areas that appear in New Super Mario Bros. U Deluxe. The set includes a Propeller Mario figure as well as a Piranha Plant.
There are also moving clouds, spinning coins, and a number of additional details meant to evoke the Nintendo Switch game.
Posted By nwcomicgames at 5:51 AM