The press release follows:
Media Release — “Humans of planet Earth. While you slept, the world changed.” The now iconic opening line from House of X #1, the start of writer Jonathan Hickman’s radical transformation of the X-Men franchise, foretold the incredible plans that mutantkind was about to unleash on the Marvel Universe. This June, the X-Men set out to change the world yet again at mutantkind’s inaugural HELLFIRE GALA. 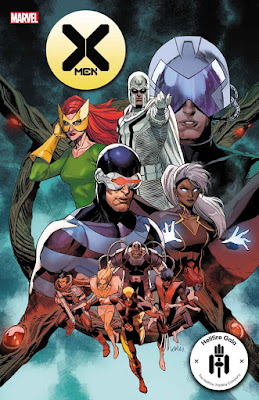 Yesterday, the first of many exciting new character designs X-Men artists have contributed specifically for the HELLFIRE GALA were revealed by Entertainment Weekly, and the world saw the meaning of “Mutant Fashion” as envisioned by superstar artist Russell Dauterman. Today, readers can check out the covers of all 12 HELLFIRE GALA issues, getting their first glimpse at the secrets, the battles, and of course, the fashion that await at this unforgettable evening.
These highly-anticipated stories will be told across 12 issues, offering different perspectives and viewpoints of a single night that will go down in Marvel Comics history. Throughout the event, fans can expect critical moments to occur that will shape the X-Men’s future as we know it—including the unveiling of the first Krakoan X-Men team, the final member of which was decided by a mega-popular www.Marvel.com vote.
The HELLFIRE GALA is the result of an epic creative collaboration of all the current X-Men writers and artists. Here’s what Gerry Duggan, writer of Marauders and the upcoming seminal HELLFIRE GALA one-shot, Planet-Size X-Men, had to say about working on this one-of-a-kind event:
“As the builders of Krakoa began discussing the gala within the pages of Marauders and beyond, the writers and editors began noodling on what the evening could be. At our X-Retreat just over a year ago in Chicago we had some very large story ideas and production plans that were ratified to give our artists the time they needed to collaborate on the designs. Russell has been an important part of the Marauders team from the beginning, and it only made sense to ask that he lead the way. The writers jammed on very simple prompts for a few of the looks, but by and large each character was a blank slate for Russell and our other artists. Our regular series artists were also asked to contribute around a half dozen high fashions, so if you don’t see your favorite character on a cover, you’ll likely see them at the party.
“We haven’t sent any of these books to press yet, but I know we’ve already left a giant mark on the line with this party. The White Queen and House Carnation set out to create a special evening like no other, and it’s going to make any other galas you might hear about look like a county fair. Not that it’s a contest, but…Krakoa wins. The whole world’s watching us now, so we must be nothing less than fabulous.”
Posted By nwcomicgames at 7:13 AM