Media Release — BOOM! Studios, under license by Hasbro, Inc. (NASDAQ: HAS) and in partnership with Wizards of the Coast LLC, has announced today that MAGIC #1, the premiere issue of the new original comic book series from acclaimed writer Jed MacKay (Marvel’s Black Cat), artist Ig Guara (Marvel’s Ghost-Spider), colorist Arianna Consonni, and letterer Ed Dukeshire, perfect for new readers and long-time fans, has sold out of the second printing at the distributor level! 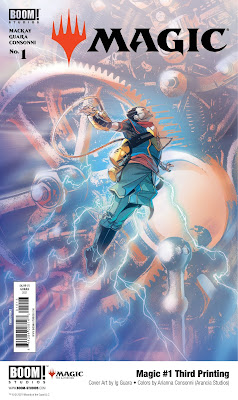 Across the vast Multiverse, those gifted with a “spark” can tap into the raw power of Magic and travel across realms — they are Planeswalkers. When coordinated assassination attempts on Guildmasters Ral Zarek, Vraska, and Kaya rock the city of Ravnica and leave Jace Beleren’s life hanging in the balance, a fuse is lit that threatens not just these three Guilds, but the entire plane of Ravnica. Now these three must covertly infiltrate the wild plane of Zendikar and form a tenuous alliance to uncover why the targets of the assassins have all been Planeswalkers. . . which will lead them straight to one of the most enigmatic characters in Magic history!

MAGIC is the latest release from BOOM! Studios’ eponymous imprint, home to critically acclaimed original series, including BRZRKR by Keanu Reeves, Matt Kindt, and Ron Garney; We Only Find Them When They’re Dead by Al Ewing and Simone Di Meo; Seven Secrets by Tom Taylor and Daniele Di Nicuolo; Something is Killing the Children by James Tynion IV and Werther Dell’Edera; Once & Future by Kieron Gillen and Dan Mora; Proctor Valley Road by Grant Morrison, Alex Child, and Naomi Franquiz; The Many Deaths of Laila Starr by Ram V and Filipe Andrade; and the upcoming Eve by Victor LaValle and Jo Mi-Gyeong. The imprint also publishes popular licensed properties including Dune: House Atreides from Brian Herbert, Kevin J. Anderson, and Dev Pramanik; and Mighty Morphin and Power Rangers from Ryan Parrott, Marco Renna, and Francesco Mortarino.

Print copies of MAGIC #1 FIRST PRINTING may be available now exclusively at local comic book shops (use comicshoplocator.com to find the nearest one) or at the BOOM! Studios webstore. Digital copies can be purchased from content providers like comiXology, iBooks, Google Play, and Madefire. Print copies of MAGIC #1 SECOND PRINTING will be available at local comic book shops on April 28, 2021.

For continuing news on MAGIC and more comic book series from BOOM! Studios, stay tuned to www.boom-studios.com and follow @boomstudios on Twitter.

About Magic: The Gathering

BOOM! Studios was founded by Ross Richie in 2005 with the singular focus of creating world-class comic book and graphic novel storytelling for all audiences. Through the development of four distinct imprints—BOOM! Studios, BOOM! Box, KaBOOM!, and Archaia—BOOM! has produced award-winning original work, including Lumberjanes, Once & Future, Something is Killing The Children, Giant Days, and Mouse Guard, while also breaking new ground with established licenses such as Buffy The Vampire Slayer, Firefly, WWE, Mighty Morphin Power Rangers, Cartoon Network, and The Jim Henson Company properties. BOOM! will also bring their original series to life through unique first-look relationships with 20th Television and with Netflix for TV. Please visit www.boom-studios.com for more information.