If Thor's hammer Mjolnir is an unstoppable force and Captain America's shield in an immovable object, the age-old physics question about what happens when they meet might be answered in July 14's Thor #15, the start of a new "Midgard-shaking" story arc by series writer Donny Cates.

Titled 'Revelations,' the new story teams Cates with guest artist Michele Bandini (King in Black: Spider-Man) standing in for the series regular artist Nic Klein who Marvel assures readers will be returning to the title for the next arc. 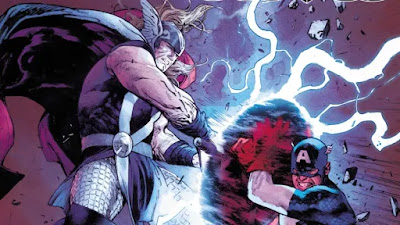 "'Revelations' will pack plenty of surprises," according to the publisher, including a fight between the God of Thunder Thor and America's Sentinel of Liberty Captain America (as seen on the cover by former Thor artist Olivier Coipel and colorist Matt Wilson). For you Disney Plus The Falcon and the Winer Soldier viewers out there, Captain America is still Steve Rogers in Marvel Comics continuity.

Following the events of the current Thor story arc 'Prey,' "the wounds of Donald Blake have not yet healed, and new Hel is afoot!" reads Marvel's description. "With all inhabitants back in Asgard, and Odin's presence returned after being away so long, an air of tension now sits upon the throne! Father and son. All-Father and All-Father. Odin and Thor. Is this relationship forever doomed, and what does it mean for the Ten Realms?"

Posted By nwcomicgames at 6:19 AM