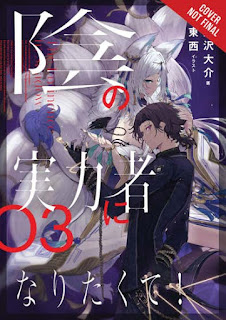 Eminence in Shadow Light Novel HC Vol 03 $20.00 Yen On
By: Daisuke Aizawa , Touzai
An invitation to an unfamiliar city can only mean something fun is about to go down.
Sid follows Claire to the lawless city, where he's launched into his newest quest: to hunt down the founding vampire, the Queen of Blood, sleeping somewhere in this land.
On the journey, he crosses paths with a mysterious girl-Mary, known as the oldest vampire hunter.
Posted By nwcomicgames at 5:13 AM