Just four weeks before its planned release, Marvel Comics' Children of the Atom #3 is undergoing a significant artist change. 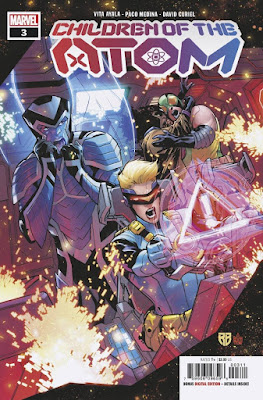 he publisher has informed retailers that series artist Bernard Chang is no longer drawing the issue, with veteran Marvel artist Paco Medina stepping in to fill his shoes.

In addition, Chang's cover to Children of the Atom #3 has been moved to be a variant cover, with RB Silva's originally solicited variant cover for the issue now reclassified as the primary cover.

The publisher hasn't given a reason for these changes, however, Medina is also slotted in to draw Children of the Atom #4.

Curiously, Children of the Atom is the only ongoing X-title excluded from the broader 'Hellfire Gala' crossover event that month - explained by the publisher as due to story reasons.

This superhero series about humans masquerading as the mutants they're fans of has had a number of production issues over the past year. Originally scheduled to launch in early 2020, the series was put on an indefinite hiatus. It was later rescheduled for a January 2021 release, then pushed back again to an eventual March debut. The first issue also had problems upon release - with an earlier draft of Children of the Atom #1 appearing as a digital release - different from the finalized version in the print edition. Marvel quickly corrected the issue.

So what is Bernard Chang doing if it's not drawing Children of the Atom #3 or #4? He is drawing stories in both the upcoming DC Festival of Heroes: An Asian Superhero Celebration and Teen Titans Academy 2021 Yearbook anthologies, and also recently designed custom sneakers for Brandblack called 'Rare Metal II Aqua 3D x Bernard Chang.'

Children of the Atom #3 by writer Vita Ayala and artist Paco Medina goes on sale on May 12.

Posted By nwcomicgames at 6:27 AM