Media Release — Following the fun and excitement of comic book limited series like gen:LOCK and the first RWBY, Rooster Teeth and DC are joining forces once again, this time to combine the worlds of their popular anime/manga series with the World’s Greatest Super Heroes in RWBY/Justice League! 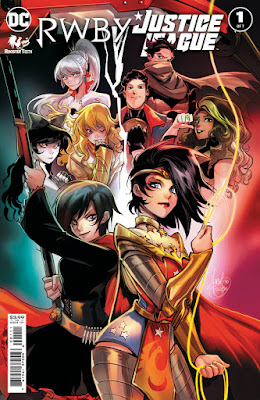 RWBY/Justice League introduces fans of manga and superheroes to the Bruce Wayne, Clark Kent and Diana Prince of Remnant, fighting with Team RWBY. A new Grimm is running rampant across the island of Patch, and Ruby and Yang must team up with a young red and blue-clad farm boy to stop it!

Meanwhile, Blake meets a mysterious woman who’s suddenly appeared on Menagerie, but her purpose for being there remains a secret. And why does she act like she hasn’t been around modern society?

Posted By nwcomicgames at 5:31 PM