With Disney theme parks slowly re-opening their doors, Marvel Comics' planned tie-in comic to an upcoming Spider-Man attraction at Disney Parks is back on the schedule for release. 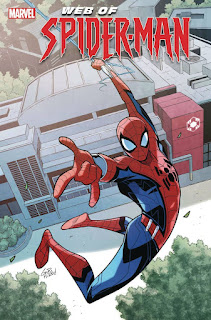 The five-issue WEB of Spider-Man comic book series has been announced to finally go on sale June 9. The 'WEB' stands for 'Worldwide Engineering Brigade', and is part of the story of the upcoming Web Slingers: A Spider-Man Adventure ride coming to Disney California Adventure and Walt Disney Studios Park as part of their Avengers Campus areas.
"Peter Parker. Spider-Man. Scientist. Troublemaker? Thanks to none other than Tony Stark, a new scientific research station for the teenage heroes of the Marvel Universe has just been completed  -  and Spider-Man just got an invitation to join!" reads Marvel's description of WEB of Spider-Man #1.
"Working alongside some of your favorite faces from the MCU and a whole bunch of awesome new gadgets, and with Iron Man keeping an eye on the them, surely everything's going to go great for the heroes, right?"
Posted By nwcomicgames at 5:08 PM