Media Release — Beginning in June, Todd McFarlane officially releases the beginning of his new “world-building” universe. Nearly 30 years in the making, the highly anticipated Spawn’s Universe #1 is set to visually expand with a reveal of some of the stunning artwork by superstar artists Jim Cheung and colorist FCO. McFarlane takes on the writing duties for this inaugural book that will be the launchpad to build a bigger multi-character, interconnected comic book universe based around his top-selling monthly Spawn comic. 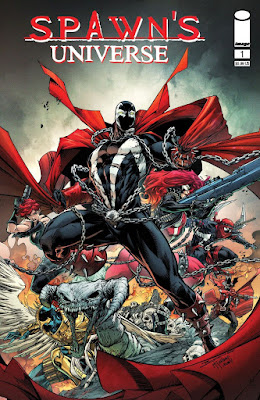 Spawn’s Universe #1 will be available with several variant covers. Most prominently, featuring the extraordinary artwork of J. Scott Campbell, who will be doing a set of four covers, each depicting one of the major characters who will be making the biggest impact in all the 2021 comic titles McFarlane is unleashing. Additional variant covers will be created by McFarlane and a group cover by artist Brett Booth—with inks by McFarlane. More covers and incentives will be announced later. However, these initial six covers will set the stage for over a dozen high profile artists to add their depiction of Spawn and other fan-favorite heroes that will set the stage for three new monthly spin-off Spawn titles: King Spawn, Gunslinger Spawn, and The Scorched, all releasing nationwide in 2021.

Contained inside Spawn’s Universe #1 will be four different stories (Spawn, She-Spawn, Medieval Spawn, and Gunslinger Spawn) highlighting different Spawn characters from the past and present as well as the introduction of new villains. The acclaimed artists working on each of the chapters will be:

Spawn’s Universe #1, a 52-page, one-shot issue, will launch on Wednesday, June 30 with a retail price of only $5.99. Given the current pricing from other comic companies, this will be one of the comic’s most outstanding value of the year!

McFarlane’s vision is to create new exciting superheroes and new major villains over the next year and beyond.

Todd McFarlane said: “I’ve waited almost 30 years to be able to get to this moment. To deliver on ideas, I hope they will grow from this initial seed called Spawn’s Universe #1 into a fully formed world populated with hundreds and hundreds of characters in the near future. The stage will be set with this book, and soon I’ll be launching into new monthly titles for the first time since 1992. I can’t wait to show comic readers all the crazy ideas in my head as well as opening up the floodgate to so many talented creators that have said they’d like to join me on this journey.”

Posted By nwcomicgames at 5:47 AM