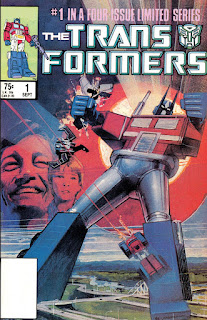 Originally scheduled as a four-issue miniseries, it spawned a mythology that would inform other versions of the saga. It also had a UK sister title that spliced original stories into the continuity, running for 332 issues.

Issues # 1-4 - The Autobots and Decepticons land on Earth via the Ark, paralleling the cartoon. The Autobots are reformatted by the Ark to resemble cars and trucks; the Decepticons take the form of jets, weapons or in the case of Soundwave, a cassette deck with tapes.

Ultimately, it is the humans that the Autobots befriend that save the day. Buster Witwicky's father, captured by the Decepticons to formulate a fuel for them, secretly poisons his captors.

In the final battle, five Autobots take on the entire Decepticon army. With the Autobots on the cusp of defeat, the tainted fuel concocted by Mr. Witwicky kicks in and the Decepticons fall. 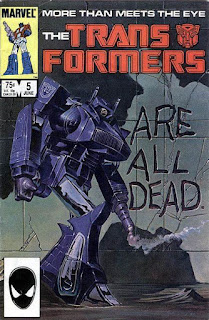 The Autobots do not even have time to celebrate, however, as the four-part miniseries ends with Shockwave making an appearance, blowing the remaining Autobots to pieces. This cliffhanger led directly into the monthly Marvel run, which began three months after the miniseries ended (issue #4 had a cover date of March 1985; while issue #5 had a date of June).

The series was originally intended to end after issue #4 and the planned last page of issue #4 indicated as much, but with strong sales, Marvel was convinced to make the series ongoing and the ending was altered to have Shockwave show up and attack the Autobots prior to the issue being published.

The series was also set in the Marvel Universe at one point with the X-Men's Dazzler is referenced in Issue #2 as well as Spider-Man, Joe Robertson and Nick Fury and Dum Dum Dugan of S.H.I.E.L.D. making appearances as early as issue #3.

Additionally, the Savage Land appears in issue #4 when Ratchet visits the place which debuted in X-Men. The Marvel Universe connections were since jettisoned in later issues of the comic.

Posted By nwcomicgames at 5:59 AM