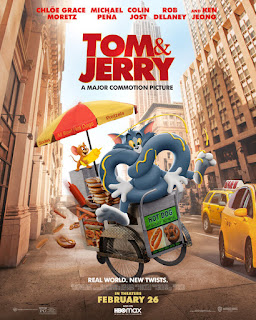 Tom & Jerry (2021)
Theatrical Release Date: 02/26/2021
Language: English
Genre: Animation/Adventure
MPAA Rating: PG
Director: Tim Story
Actors: Chloë Grace Moretz, Michael Peña, Rob Delaney, Colin Jost, Ken Jeong, Pallavi Sharda
Plot: After being kicked out of the house due, housecat Tom and rival mouse Jerry put aside their differences and go their separate ways. But as fate would have it, Jerry, now residing in a posh Manhattan apartment will once again cross paths with Tom when a newly-hired staff member chooses the cat to help rid the hotel of said mouse before a major wedding ceremony. But when the rivalry is rekindled, no one is safe from their antics even as an even more devious conspiracy involving the deputy hotel manager is uncovered.
Posted By nwcomicgames at 5:23 AM