Monday's Headlines | Cable is Back!

The fully grown - and fully gruff - adult Cable will apparently be back on the menu in the Marvel Universe this August, starring in a one-shot titled Cable Reloaded which ties into the upcoming 'Last Annihilation' cosmic crossover.

Written by Al Ewing with art from Bob Quinn, Cable Reloaded puts the older Cable on a mission to steal a special weapon from an alien world. 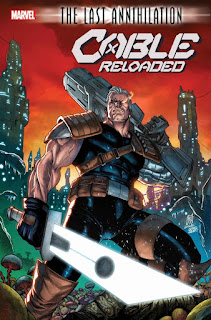 "THE BIG GUN IS BACK! It's a new era, in a new galaxy, that's under siege from a deadly new threat…but you can still rely on one man," reads Marvel's official description of Cable Reloaded #1. "Cable is locked, loaded, and landing on the deadliest planet in X-history – to steal the ultimate weapon…and stop the LAST ANNIHILATION!"

The adult Cable was replaced by his younger self back in 2018's Extermination, with the younger Cable flat-out killing his older self as part of a plan to set right issues that were occurring in the timestream. July 28's Cable #12 will conclude Cable's current ongoing title and set a new course for both the younger and older versions of Cable.

"Cable Reloaded gives me and Bob a chance to explore Marvel's other man out of time in his natural element – a high-octane action-fest with a few old and new friends," Ewing tells AiPT!, who announced the one-shot. "To help defeat the 'Last Annihilation,' Cable and his team will be taking on some long-unseen X-foes, man to man and quite literally face to face…"

It's a mystery who those "long-unseen X-foes" may be, and the X-Men certainly have enough cosmic villains to fit the bill. It could be anyone from the Brood, to the warriors of the Breakworld, or many other potential characters.

Cable Reloaded #1 is due out in August with a cover from Stefano Caselli.

Posted By nwcomicgames at 5:36 PM