The press release follows:
Media Release — Michael Walsh’s new horror anthology The Silver Coin is being extended into an ongoing series this August in response to its breakout success and positive reception among fans. 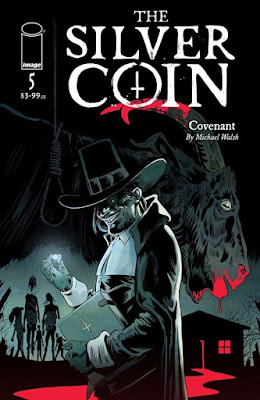 The bestselling series, which has thus far showcased a murderers’ row of talent—including Chip Zdarsky (Stillwater), Kelly Thompson, Ed Brisson, and Jeff Lemire (Gideon Falls, Sweet Tooth)—will continue to send chills down readers spines with Joshua Williamson, Ram V, Matthew Rosenberg, and Vita Ayala on board to serve up thrilling new stories.
“I am beyond excited to continue telling stories in the world of The Silver Coin. The response to the first arc has been overwhelming and it’s provided me with the opportunity to bring in an all-new group of incredible talent for more tales of terror,” said Walsh. “I’m very lucky to be working with people that consistently elevate my own work and push me to grow as an artist and writer. Josh, Ram, Matt, and Vita are all such insightful, creative and unique voices in the world of comics… I can’t WAIT to show off the horrors that we are crafting together.”
Each issue of The Silver Coin tells a tale of terror in a shared supernatural world. The story starts in 1978 with a failing rock band whose fortune suddenly changes when they find the mysterious Silver Coin. Little do they know that fame comes with a cost, and a curse is always hungry.
The Silver Coin #5 Cover A by Michael Walsh (Diamond Code JUN210246) and The Silver Coin #5 Cover B by Maya McKibbin (Diamond Code JUN210247) will be available at comic book shops on Wednesday, August 11.
Posted By nwcomicgames at 10:20 AM