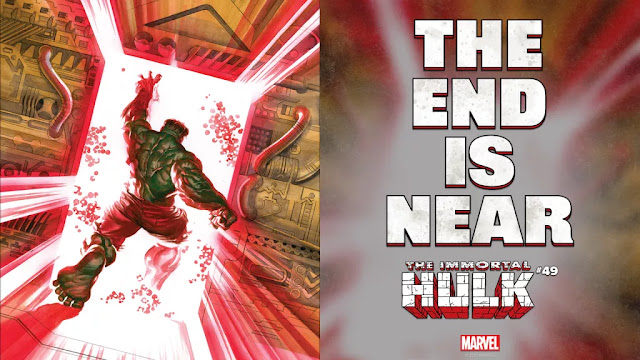 In case you missed it today! The Hulk may be immortal, but his title Immortal Hulk is not, as the fan-and-critical darling is, as expected, now announced to end with Immortal Hulk #50.

Immortal Hulk #50 has long been believed to be the planned endpoint for the title, though series writer Al Ewing has been somewhat cagey about nailing down the specifics until now.

"This year will see the climactic end to one of the most critically acclaimed runs in recent history: Al Ewing and Joe Bennett’s IMMORTAL HULK," reads Marvel's announcement. "Closing out this thought-provoking, character redefining epic with IMMORTAL HULK #50, Ewing and Bennett will bid farewell to Bruce Banner, the Green Door, and all the unforgettable elements they’ve cemented into the Hulk mythos."

Before #50 closes out the saga, however, August's Immortal Hulk #49 will set the stage for the big finale. Marvel has released Alex Ross's final cover for the series, along with the ominous tagline "The end is near."

"There are plenty of surprises still in store and fans will want to pick up IMMORTAL HULK #49 where the build-up to the explosive final issue begins with a bang!" Marvel's announcement continues.

That tagline, "The end is near," alludes to the title's impending conclusion, but it may also mean something much bigger for Bruce Banner/Hulk. Ewing's Immortal Hulk has centered on the idea that all Gamma mutates, Hulk included, are subject to resurrection every time they die, no matter how brutal or complete the circumstances of their demise.

Immortal Hulk #49 goes on sale on August 4. This presumably indicates that Immortal Hulk #50, the series finale, will be out in September, providing the title maintains a monthly schedule through the end.

Posted By nwcomicgames at 4:21 PM