Well, artist John Romita Jr.'s recently announced return to Marvel Comics also apparently includes a return to one of the stories that helped launch his career with the publisher, 'The Trial of Magneto.'

Marvel has released a teaser featuring art from Romita, promising "the trial that threatens to divide mutantkind!" launching in August, with the title 'The Trial of Magneto.' 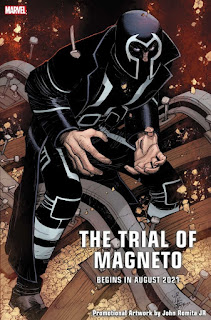 It's unclear what the master of magnetism, who is one of the founders of Krakoa and currently serves on its Quiet Council, may do to earn a trial, but Krakoa only has a few laws, and one of them is "don't kill humans."

As for the original 'Trial of Magneto,' that story took place in Uncanny X-Men #200, part of Romita's long run on the title that helped define the team for the '80s and made a name for the artist.

On trial for his attempted crimes against humanity, Magneto actually winds up becoming the headmaster of the Xavier Academy as a result of the story (Charles Xavier himself went away to space to be with Lilandra, his Shi'Ar girlfriend).

This era marked Magneto's first foray into out-and-out mutant heroism and constituted one of the biggest shake-ups in the X-Men ever at the time.

It's unclear whether Romita will provide art for the new 'Trial of Magneto' story itself, or if he's simply providing the teaser art, but Marvel promises more information next week.