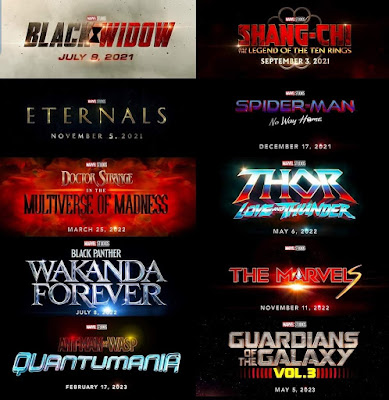 Phase Four of the Marvel Cinematic Universe (MCU) is a group of American superhero films and television series produced by Marvel Studios based on characters that appear in publications by Marvel Comics. Phase Four features all of the Marvel Studios productions set to be released from 2021 through 2023.
It is the first phase in the franchise to include television series, with Marvel Studios developing several event series for the streaming service Disney+ in addition to the feature films that it was already set to produce.
The phase began with the series WandaVision, which premiered in January 2021, while the first film in the phase will be Black Widow, set to be released in July 2021 by Walt Disney Studios Motion Pictures. The release schedule of the phase was changed several times due to the COVID-19 pandemic.
The films of the phase include Black Widow with Scarlett Johansson returning as Natasha Romanoff / Black Widow, Shang-Chi and the Legend of the Ten Rings starring Simu Liu, the ensemble Eternals, the sequels Spider-Man: No Way Home from Sony Pictures Releasing with Tom Holland returning as Peter Parker / Spider-Man, Doctor Strange in the Multiverse of Madness with Benedict Cumberbatch returning as Dr. Stephen Strange, Thor: Love and Thunder with Chris Hemsworth returning as Thor, Black Panther II, Captain Marvel 2 with Brie Larson returning as Carol Danvers / Captain Marvel, Ant-Man and the Wasp: Quantumania starring Paul Rudd and Evangeline Lilly, and the ensemble Guardians of the Galaxy Vol. 3, along with Fantastic Four.
The Disney+ television series of the phase include WandaVision with Elizabeth Olsen and Paul Bettany in the title roles, The Falcon and the Winter Soldier with Anthony Mackie and Sebastian Stan in the title roles, the first season of Loki starring Tom Hiddleston, the first season of the animated What If...? narrated by Jeffrey Wright, Ms. Marvel starring Iman Vellani, Hawkeye starring Jeremy Renner and Hailee Steinfeld, Moon Knight starring Oscar Isaac.
Posted By nwcomicgames at 4:31 PM