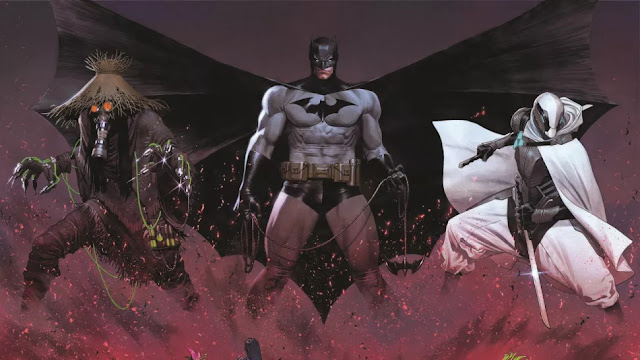 'Fear State' crosses over the ongoing Catwoman and Harley Quinn comic book series with a pair of new titles as the machinations of the redesigned Scarecrow come to a head, as he sends Gotham City "straight to Hell."

"Fear State not only continues the Scarecrow's vision of a fear-controlled Gotham but also Mayor Christopher Nakano's mission to protect the city with his ground-breaking deal with the Magistrate," reads DC's description.

According to the publisher, in addition to launching several new series and plotlines across the entire Batman family of titles, the event sets up "a new status quo for 2022!"

'Fear State' begins August 10 in the 40-page I Am Batman #0 by writer John Ridley and artist Travel Foreman. Presumably the launch of a new regular series, the title picks up on the events of The Next Batman: Second Son by the same creative team.

"Jace Fox begins the march toward his destiny when he fights to protect Alleytown against the oppressive forces of the Magistrate, using Batman armor and tech he's found in Bruce Wayne's old base of operations, the Hibernaculum!" reads DC's description.

I Am Batman #0 will feature a main cover by Foreman and two variant covers by Dave Wilkins and Derrick Chew, respectively.

Posted By nwcomicgames at 5:08 AM