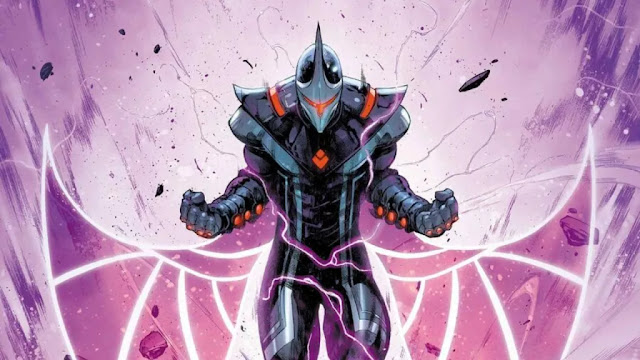 In comic book news..... As foreshadowed by his story in the recent Darkhawk: Heart of the Hawk one-shot, writer Kyle Higgins will launch a new Darkhawk ongoing title in August alongside artist Juanan Ramirez.

In the new title, Chris Powell's amulet will arrive in the hands of a new Darkhawk following Powell sending it into space to find a new wielder moments before his death in Heart of the Hawk.

"Darkhawk #1 introduces a new heir to the mantle of Darkhawk in Connor Young, a seventeen-year-old star basketball player who, like Chris Powell before him, discovers the mysterious amulet and unlocks powers of Darkhawk," reads Marvel's announcement.

Higgins, who is also the writer of Marvel's Trials of Ultraman limited series as well as the creator-owned teen hero title Radiant Black, likened the themes he plans to explore in Darkhawk to some of the other stories he's recently told.

"My approach to the mantle and the book, in general, comes from the same place that some of my other recent superhero work comes from: building something new and contemporary, while staying respectful to what's come before," Higgins states.

"We'll be taking the body-swapping-with-an-android-but-still-controlling-it-with-your-consciousness-despite-not-being-genetically-compatible, in some pretty different new directions," Higgins continues. "And at the core of that, is Connor Young. And the sudden medical diagnosis that upends his entire life."

Posted By nwcomicgames at 5:08 AM