Marvel Spider-man | Ben Reilly Is Back!

It's official: Ben Reilly, the clone of Peter Parker who took up the mantle of Spider-Man during the '90s 'Clone Saga' story, will return in October as the new star of Amazing Spider-Man, once again taking up the role in Peter Parker's (not yet fully explained) absence.
As previously teased, Reilly will become the new starring Spider-Man in the wall-crawler's official title when the new creative team takes over following Nick Spencer's exit - and what's more, Ben Reilly may get the opportunity to be Spidey again thanks to the death of Peter Parker.
While that last bit remains unconfirmed, Marvel's announcement of the new Amazing Spider-Man direction and creative team certainly heavily hints that's what's on the horizon for the finale of Spencer's run on the title. 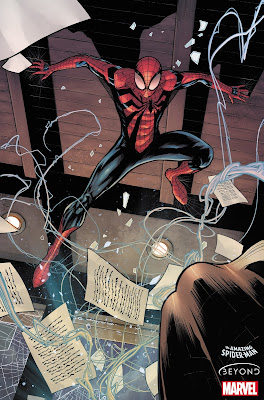 "A bold new age of Amazing Spider-Man is on the horizon! Starting in October, Amazing Spider-Man will return with a story so bombastic that it will take the greatest team of web-writers and arachnid-artists ever assembled to tell it," reads Marvel's official announcement. "Kelly Thompson, Saladin Ahmed, Cody Ziglar, Patrick Gleason, and Zeb Wells will team up on the thrice-monthly title to shake up the Spider-Man mythos in ways no one will see coming."
Amazing Spider-Man has published multiple times a month in the past, notably in the 'Brand New Day' era which followed the dissolution of Peter Parker and Mary Jane's marriage due to a deal with Mephisto - a plot point that has come up in the course of Spencer's run. That era also included a whole team of writers on the title, known collectively at the time as the Spider-Man 'brain trust.'
"The saga will kick off in Amazing Spider-Man #75 where Ben Reilly will return to take back the mantle of Spider-Man," continues Marvel's announcement. "Backed by the Beyond Corporation, the captivating clone of Peter Parker is determined to be the best version of Spider-Man there ever was."

"Cody Ziglar is a new name in comics, but the work he did for the upcoming Disney Plus She-Hulk show and Rick and Morty showed us at Marvel that he is part of the next generation of Marvel superstar writers and he has not disappointed here."

Marvel has not yet named any artists that will join the new, expanded writing team.

Sony and Marvel Studios' Spider-Man: No Way Home opens December 17, just months after this comic book storyline kicks off, and in September Marvel will launch The Death of Doctor Strange, a five-issue limited series that promises to kill off Stephen Strange also just months before he returns to the MCU in March 25, 2022's Doctor Strange in the Multiverse of Madness.

The whole era will kick off in August 14's Spider-Man/Venom Free Comic Book Day issue, with the new creative team coming on board in October's Amazing Spider-Man #75.

Posted By nwcomicgames at 7:57 AM