Monday's Headlines | What Did We Miss? 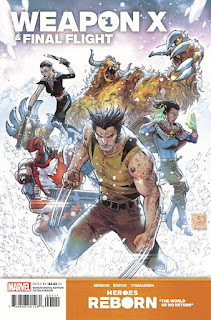 Heroes Reborn Weapon X and Final Flight #1
$4.99 Marvel Comics
THEY'RE THE BEST THERE IS AT WHAT THEY DO!
In a world without the Avengers, the Squadron Supreme protects and defends the interests of America!
But where does that leave a country like Canada? The Great White North is now a wasteland. Their forests are scorched. Their provinces annexed.
Their people barely surviving. Who will stand up and protect them from the supremacy of the Squadron? Weapon X and Final Flight, that's who!
40 PGS./ONE-SHOT/Rated T+
Posted By nwcomicgames at 6:10 AM