Venom will take a whole new direction following the impending departure of fan favorite creative team of writer Donny Cates and artist Ryan Stegman. Cates and Stegman redefined the Venom mythos and elevated Eddie Brock to the status of a symbiote god in the recent King in Black, the culmination of their story. 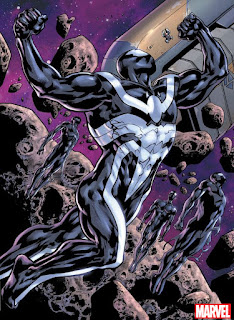 The FCBD special will be followed up by a new Venom #1, though no planned release date for the relaunched ongoing title has been announced.

As for what the new Venom from V, Ewing, and Hitch have in store, Marvel describes the new title as "dramatic and dangerous," with a "twisted new vision" for the character.

Considering how intense the story of King in Black was, and how much it altered the common perception of the place of Venom and the symbiotes in the Marvel Universe, taking things to a level even beyond that is a tall order.

"When my editors at Marvel reached out about taking on Venom alongside Al Ewing and Bryan Hitch, I was not prepared for the kind of creative thrill it has been ever since," states Ram V as part of Marvel's announcement.

"This story is going to expand and push the symbiote narrative and lore in even more unexpected and fantastic directions. It is also an utter thrill having the sort of call and response mechanic I've had with a writer like Al and an artist of Bryan’s caliber. Fans and new readers, strap in - you ain’t seen nothin' yet."

Posted By nwcomicgames at 5:46 AM