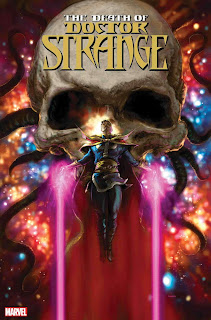 The five-issue series brings Stephen Strange's vigil as the defender of Earth from all supernatural threats -- which began in 1963’s Strange Tales #110 from Stan Lee and Steve Ditko -- to its end. But without Doctor Strange, who will defend the Earth in the Sorcerer Supreme's place? According to Marvel, that, along with discovering who killed the hero, is the story of Death of Doctor Strange.

"'What happens to the world if Doctor Strange isn't in it?' It's a question that I'm excited to show people the answer to in Death of Doctor Strange,” MacKay said in a press release. “Strange has been a Marvel fixture from the early days, but now, his time has run out and as a Strange fan, it's been my bittersweet privilege to shepherd him through his last day and the effects that snowball out of it. We've cooked up a whale of a story to send Strange off with, and I can't wait for people to join us on it!"

“Doctor Strange has long been top of my 'most coveted character' list. To finally get chance to draw him in such a momentous series is… well, magic,” Garbett said. “I couldn’t be more excited for the project and for everyone to see what we’ve got in store for Stephen and those closest to him. Jed’s conjured the perfect finale for Doctor Strange - and it’s a real third eye-opener! See you in September!”

Timed just months ahead of the release of Doctor Strange in the Multiverse of Madness into theaters, continuing the Sorcerer Supreme's adventure in the Marvel Cinematic Universe, Death of Doctor Strange is likely to redefine Doctor Strange's role in the Marvel Universe for a new era. It's the latest in a string of announcements revealing a season of change for Marvel this fall, with a new Venom series, new Incredible Hulk series, and the X-Men's Inferno.

DEATH OF DOCTOR STRANGE #1 (OF 5)
Written by JED MACKAY
Art by LEE GARBETT
Cover by KAARE ANDREWS
Posted By nwcomicgames at 5:05 AM