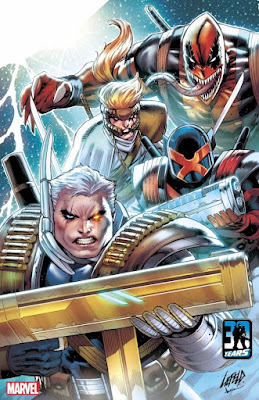 Media Release — On this day 30 years ago, X-FORCE #1 debuted and took the comic book industry by storm! Created by Rob Liefeld, X-FORCE #1 was a blockbuster success, selling over 5 million copies to become one of the best-selling single issues in Marvel Comics history.

Commemorating the anniversary of this groundbreaking issue, Rob Liefeld will return to the X-Force saga this November with a new chapter in X-FORCE: KILLSHOT!

The special one-shot will feature an explosive adventure starring Cable and his mighty militant mutant squad, taking readers back to the beloved 90s heyday of the X-Men franchise. Cable and his counterparts will assemble five separate X-Force squadrons – from various points in time – to converge on Asteroid S for an all-out assault to defeat Stryfe once and for all.
“X-Force was a huge gamble that paid off big for Marvel, paid off big for retailers and it changed my life forever.” Liefeld states, reflecting on the impact and legacy of the title. “I’m thrilled and honored to share Killshot with everyone. Thirty years in the making, I intend to make every page a huge kick for fans new and old.”
Return to one of the most iconic runs in the X-Men mythos this November in X-FORCE: KILLSHOT! Check out the cover below and visit Marvel.com for more information.
X-FORCE: KILLSHOT #1
Written by ROB LIEFELD
Art by ROB LIEFELD
On Sale November!
Posted By nwcomicgames at 8:06 AM