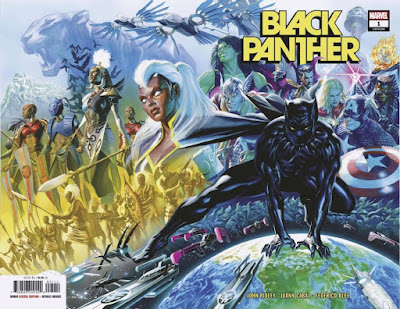 The upcoming Black Panther ongoing series by John Ridley and Juann Cabal has been delayed by Marvel Comics.
The publisher has informed retailers that the monthly series, originally planned to launch on August 4, has now been postponed to November 3. The second issue is now slated to arrive December 1.
Marvel Comics hasn't disclosed the reason for this new Black Panther series' delays, however, the previous volume also had routine schedule issues not including an 11-month hiatus during the height of the COVID-19 pandemic.
Originally announced via the New York Times, Ridley and Cabal's Black Panther is marketed as a revolutionary new take on T'Challa and the Wakandan kingdom that will "upend everything… and have ramifications for the entire Marvel Universe!
Posted By nwcomicgames at 6:06 AM