The press release follows:
Media Release — Bestselling series Time Before Time by Declan Shalvey, Rory McConville, and Joe Palmer will kick off a new story arc this November from Image Comics, but in October Time Before Time #6 will tell a standalone story—drawn by Shalvey and featuring a 1994-themed variant by Mike Del Mundo. 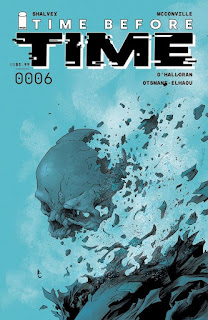 “Time Before Time #6 is a one shot story set in 1994, featuring the return of Oscar, (Tatsuo’s old partner) on a mission taking place before the events of #1. Yeah, you heard me… this is why time travel stories are so much fun!” said Shalvey.
“Everyone on the book has been blown away by the brilliant response to Time Before Time since #1 came out, it’s been amazing. While Rory and I were talking about where our second arc would go, I thought it might be fun to do a self-contained story outside of our main Tatsuo/Nadia storyline, to flesh out the world around our characters a bit more. I warmed to the idea so much that I decided it would be great fun to draw it myself. I’m really enjoying playing in the world that I’ve been co-writing with Rory, feeding off the fantastic work Joe Palmer has been doing issue after issue. I’m hoping this could be a great jumping on point for anyone who might be curious about the series, but missed out on getting #1. I feel there’s a time travel joke in here somewhere but I’m drawing a blank.”
In Time Before Time #6, Oscar Gomez is on the hunt for a Syndicate deserter hiding out in the year 1994. Can he rely on the local Syndicate network to track the deserter down?
Time Before Time #6 will be available at comic book shops on Wednesday, October 20:
Cover A Shalvey – Diamond Code AUG210268
Cover B O’Sullivan – Diamond Code AUG210269
Cover C Del Mundo – Diamond Code AUG210270
Posted By nwcomicgames at 6:02 AM