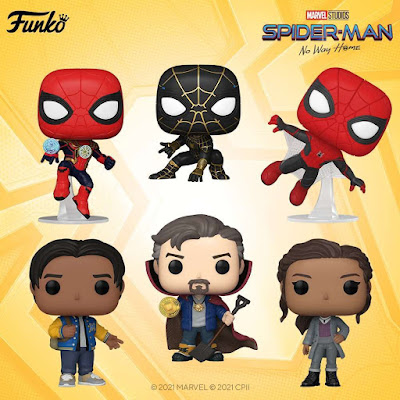 Following Marvel's big reveal of new Spider-Man: No Way Home merch last Friday morning, Funko has opened up pre-orders for their collection of Pop figures based on the upcoming film. These Pop figures include several of Spider-Man's new looks - including that magnificent black and gold suit.

Other Funko Pops in the first Spider-Man: No Way Home wave include Doctor Strange, MJ, and Ned. Speaking of Doctor Strange, one of the new Spider-Man Pop figures in the wave is dubbed "The Integrated Suit" and features magical effects - which is something to ponder.

Pre-orders for the common figures in this wave are live here at Entertainment Earth now.

Posted By nwcomicgames at 7:26 AM