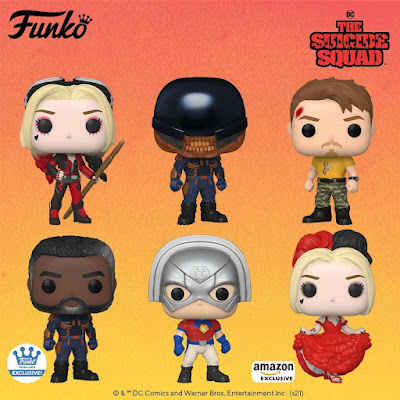 Last week, we got our first look at Marvel's wave of Spider-Man: No Way Home Funko Pops, and now it's DC's turn with their wave for the upcoming film The Suicide Squad. It's a big wave that includes Pop figures, keychains, and Mystery Minis.
Let's start with a breakdown of the common releases - all of which are available to pre-order here at Entertainment Earth now.
The Suicide Squad Pop Figures:
Harley Quinn (Bodysuit)
Harley (Damaged Dress)
Bloodsport
Peacemaker
Polka-Dot Man
Ratcatcher II with Sebastian
King Shark
Rick Flag
In The Suicide Squad, welcome to hell — a.k.a. Bell Reve, the prison with the highest mortality rate in the US of A. Where the worst Super-Villains are kept and where they will do anything to get out — even join the super-secret, super-shady Task Force X. Today's do-or-die assignment? Assemble a collection of cons, including Bloodsport, Peacemaker, Captain Boomerang, Ratcatcher 2, Savant, King Shark, Blackguard, Javelin, and everyone's favorite psycho, Harley Quinn. Then arm them heavily and drop them (literally) on the remote, enemy-infused island of Corto Maltese.
The Suicide Squad will see the return of Viola Davis as Amanda Waller, Margot Robbie as Harley Quinn, Joel Kinnaman as Colonel Rick Flag, and Jai Courtney as Captain Boomerang from 2016's Suicide Squad. Joining them in the film are David Dastmalchian as Polka-Dot Man, Steve Agee as King Shark, Daniela Melchior as Ratcatcher 2, Idris Elba as Bloodsport, John Cena as Peacemaker, Nathan Fillion as T.D.K., Pete Davidson as Blackguard, Flula Borg as Javelin, Mayling Ng as Mongal, Peter Capaldi as The Thinker, Michael Rooker as Savant, Alice Braga as Sol Soria, and Sean Gunn as Weasel.
The Suicide Squad is set to be released both in theaters and on HBO Max on August 6th.
Posted By nwcomicgames at 7:20 AM