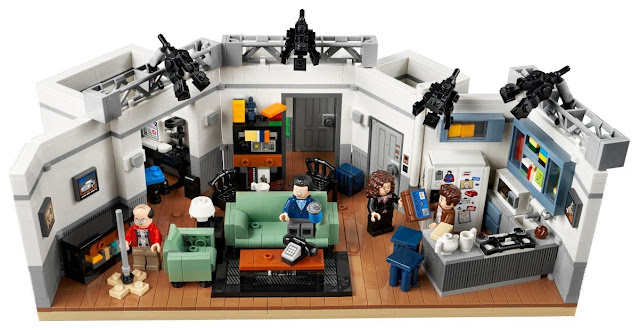 Following the success of the LEGO Friends apartments and Central Perk sets, LEGO is about to immortalize another legendary '90s NBC sitcom in brick form. The 21328 Seinfeld LEGO Ideas set recreates Jerry's apartment, and it's loaded with details and Easter eggs for fans. What's more, your first chance to own the set is happening tonight.

Indeed, LEGO VIPs will be able to order the Seinfeld LEGO set here at LEGO.com for $79.99 starting tonight July 20th/21st - most likely at 9pm PT / 12am ET. If you aren't a LEGO VIP yet, you can remedy that right here. It's free to join.

The LEGO masses will have to wait until August 1st for the general release. That said, LEGO will surely be holding inventory for the main launch, so the VIP window might sell out quickly. The Seinfeld set is one of many new LEGO offerings that are set to launch on August 1st.

Bonus points if you get the Friends and the Seinfeld LEGO sets and produce the biggest sitcom crossover event in history. Keep in mind that Funko also released a huge wave of Seinfeld Pop figures back in March - a wave that included a Mini Moment diorama lineup that can be put together to form a full set piece of Jerry's apartment.

Posted By nwcomicgames at 6:15 AM