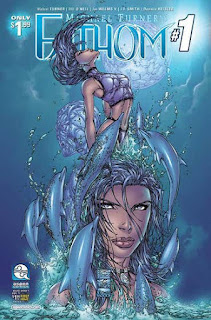 Fathom Reprint Edition #1 $1.99 Aspen Comics
Revisit the groundbreaking and record-setting debut issue of Michael Turner's underwater epic adventure - FATHOM!
One of comics' most popular and longest running independent titles, FATHOM debuted in 1998 and has been published for over 20 years. With a brand new FATHOM series debuting this fall, now is the perfect time to reacquaint yourself with Aspen Matthews and the undersea beauty of the world below as only Michael Turner could deliver!
Aspen invites you to celebrate this landmark issue with this over-sized reprint edition featuring all of the original variant interior pages as well as a special preview of the new FATHOM series coming in October!
A 40-page classic at a great introductory price, this FATHOM #1 Reprint Edition is the perfect addition to any comic collection!
Posted By nwcomicgames at 7:03 AM