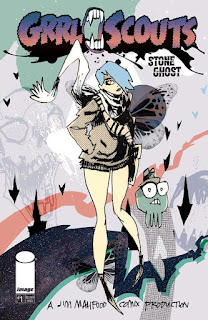 “I’m extremely excited about this new Grrl Scouts series and I think fans and new readers alike will be very entertained and definitely get a lot of bang for their buck with this one,” said Mahfood. “I’m introducing an entire new cast of characters, expanding on the mythology of the Grrl Scouts, and handling every aspect of the production of the book: writing, drawing, coloring, and lettering, to make this a very unique experience! This series is for fans and collectors alike who are looking for something different and off-beat when they’re staring at that wall of new releases in the comic shop.”
Join Dio, Turtleneck Jones, and Gordi as they face off against the sinister and unpredictable evil of The Teeth! Hilarious, over-the-top, psychedelic adventure will ensue, you guys!
Packed from cover-to-cover with completely unique and eye-popping Mahfood art—including bonus comics and behind-the-scenes fun—readers will feel the Funk with this new addition to the Grrl Scouts story.
Grrl Scouts: Stone Ghost #1 Cover A by Mahfood (Diamond Code SEP210027) and Grrl Scouts: Stone Ghost #1 Cover B 1:25 incentive copy by Momoko (Diamond Code SEP210028) will both be available at comic book shops on Wednesday, November 24.
Posted By nwcomicgames at 10:08 AM