"Avengers Disassembled" is a 2004 crossover storyline published by Marvel Comics involving the Avengers, Fantastic Four, Captain America, Spider-Man and Thor. It sees the beginning of Brian Michael Bendis's Avengers run with the destruction of the existing traditional roster, and exile of several key members of the team. 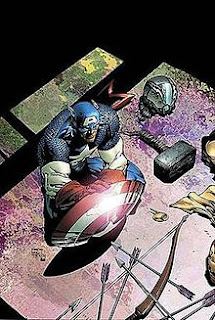 The storyline includes a number of subplots, some of which take place prior to and after the storyline, which depict other changes to the status quo: Iron Man once again closeting his secret identity, Spider-Man developing organic webshooters (as in the contemporary Sam Raimi film trilogy), and the death of Thor and Asgard in one final Ragnarok.

The main story (Chaos) ran in Avengers #500-503 and a special epilogue (Avengers Finale) and drew considerable controversy due to its overt continuity errors related to its main plot and deaths and vilification of classic Avengers members.

These continuity errors and fan backlash would lead to retconning of the events in Avengers: The Children's Crusade and AXIS, as well as the Marquis of Death story line from Mark Millar's Fantastic Four run and J. Michael Straczynski's Amazing Spider-Man run.

The series would also see to a massive relaunch of the Avengers family of titles with new ongoing series launched for the Thunderbolts, Captain America, and Iron Man as well as the launching of Young Avengers and Thor going on a three-year hiatus.

Jack of Hearts, who had been dead prior to the storyline, arrives at Avengers Mansion. The zombified hero explodes, damaging the mansion. Scott Lang is killed in the blast. The Vision pilots an Avengers Quinjet into the partially damaged Avengers Mansion, causing more damage.

Elsewhere, the Wanda Maximoff arrives at the United Nations where she has a conversation with Captain America, who announces that he is ending their fledgling relationship. Tony Stark suddenly becomes drunk and belligerent despite not having imbibed any alcohol at an important UN meeting to decide if the Avengers should have their security clearance revoked following the events of Secret War. Tony drunkenly attempts to pick a fight with the Latverian ambassador and the Avengers UN charter is revoked as Iron Man leaves Hank Pym in the lurch to respond to the "Code White" from Avengers Mansion.

Leaving the Avengers Quinjet he crashed, Vision warns the Avengers of a mysterious plan to destroy the team and then vomits up a series of eggs that spawn Ultron drones that attack the Avengers. She-Hulk becomes consumed with bloodlust, tearing Vision in half, killing him, and brutally assaulting Wasp and Captain America.

Ultimately, She-Hulk is subdued by Iron Man and Captain America as Hank Pym joins them and rushes Wasp to the hospital. Returning, Hank reveals to Cap and the team of Iron Man's drunken outburst at the UN and the UN's decision to revoke their charter. All past members of the Avengers gather at the mansion, fearing that Ultron may be behind the attack. Suddenly an armada of Kree soldiers appear in the sky and attack Manhattan. In the ensuing battle, Hawkeye's arrows are hit, causing their explosives to go off. In his dying moments, Hawkeye takes out a Kree battleship in the blast after taking flight with a commandeered Kree jet pack.

In the wake of Hawkeye's death, Doctor Strange suddenly appears for the first time since the Dark Dimension invasion several months prior. He explains to the Avengers that the inexplicable events that occurred—Tony's sudden inebriation, She-Hulk and Vision's loss of control, Jack of Heart's resurrection, and the enemies they have encountered—are magical, and that their trail leads to Wanda. A flashback reveals that Wanda has lost her sanity after an errant comment about motherhood from the Wasp triggered a suppressed memory of Wanda's lost twin children, William and Thomas. The children were magical constructs Wanda created in an impossible conception between her and the Vision. They were lost when both children were magically absorbed by the villain Master Pandemonium, and the memory was suppressed by Wanda's mentor, Agatha Harkness, reasoning that the children were unnatural constructs and better for Wanda to forget. The reawakened memory has caused Wanda to lose her sanity and blame the Avengers for the loss of her children. Strange reveals that the abilities previous ascribed to Wanda's "chaos magick" are actually uncontrolled manifestations of her true high-level ability to warp reality, and that she must be taken down immediately before she threatens the world in her current mental state.

The Avengers visit Agatha Harkness's home, and find the woman long dead, having been killed by Wanda. The Avengers find Wanda, who summons an army of the Avengers' past enemies to destroy them, including a version of Rogue, Red Skull, and a group of SS troops. Doctor Strange uses the Eye of Agamotto to put Wanda into a coma. Before the Avengers can decide what to do or how to deal with their losses, Magneto arrives to retrieve Wanda from the Avengers, much to Captain America's dismay and horror. Reluctantly, he allows Magneto to take his daughter with him after he vows to help her with the assistance of Charles Xavier.

In the aftermath, the Avengers disband, but reminisce about their numerous triumphs and memories of one another. Pietro Maximoff arrives and apologizes for Wanda, letting them know that Xavier is attempting to fix Wanda's mind, before speeding away. The remaining members accept their losses, discuss Wanda's history, and struggle with forgiveness. Ultimately, they toast to their fallen comrades, including Wanda. As they leave the destroyed headquarters, they are greeted by a civilian vigil, bearing candles and signs expressing gratitude for the heroes.

Posted By nwcomicgames at 10:43 AM